How long would it take to walk around the earth?

How they calculated the length of the Earth’s circumference 2,500 years ago, where the planet’s largest diameter is, and how long it takes to get around it on foot

The diameter of the Earth is important to scientists. It can be used to calculate the area of our planet and the distance to its center, and it also helps to make maps and conduct launches of spacecraft. Let’s find out how these parameters are calculated and what their values are. 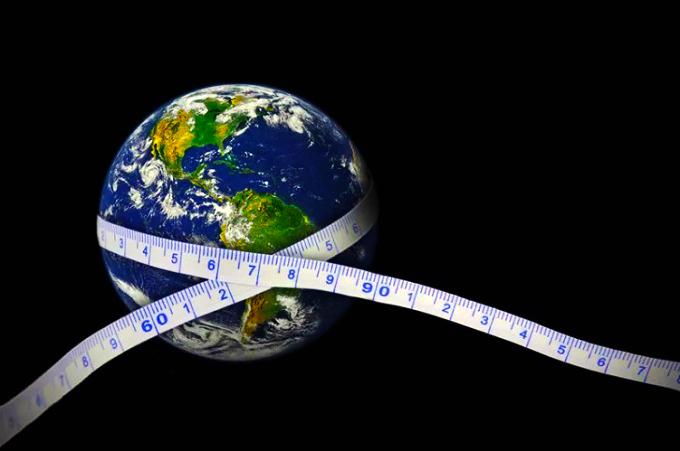 Main parameters of the Earth

The shape of the planet

When asked what the shape of the Earth is, most people will answer that it is spherical. And this is where they would make a mistake. The planet is affected by gravitational forces: the huge mass gravitates toward the core, so there is constant compression. The strongest centrifugal force, due to the Earth’s movement around its axis, is at the equator.

The Earth is a kind of “irregular ball. Compression is the reason why the equatorial diameter of the planet is slightly larger than at the poles. Scientists define the shape of our planet as close to a “flattened ellipsoid.

Interestingly, because of the neglect of Earth’s poleward compression, the meter standard from 1795 was 200 microns shorter.

Local topography is also important in the shape of the planet. Of course, it cannot globally affect the shape of the planet. Thus, the difference between Mount Everest and the Mariana Trench is about 19 km. On a global scale, this figure is insignificant. The maximum distance from the center of the Earth to the equator, taking into account the convexity of the Earth’s surface, is the top of the Chimborazo volcano located in Ecuador.

What is the equator and what is it for

Equator should be understood as a line perpendicular to the axis, along the surface of the Earth, at an equal distance from the poles.

Along this entire line, day equals night. However, due to atmospheric refraction, the duration of the day is several minutes longer. Twice a year (at equinoxes), the Sun is at its zenith, and the rays will be directed strictly perpendicular to the Earth’s surface. Latitude at the equator is 0°.

The equator is critical for determining the latitude of a geographic feature. All points south of the imaginary line have southern latitude. And objects located to the north of it, respectively, have a northern latitude.

How to measure the length of the earth’s circumference

The size of the Earth is calculable. High-tech instruments and satellites are used to measure the length of the Earth’s circumference. Before the advent of these inventions, however, we had to use mathematical methods of measurement. In the 18th century, scientists P. Meschen, A.M. Lejandre, and C. Cassini used the method of triangulation.

Suppose that we need to measure the distance between some points distant by several hundred kilometers. To do this, we need to build a reference network on the ground. This can be done with the help of triangles. Their tops will be places that are at altitude. On them we build imaginary pyramids so that they are directed to nearby points.

The imaginary figures should be convenient for setting up an angle gauge and calculating degrees of angles. In one of the triangles, measure one side that runs on level ground. This will be the baseline.

The simplest way to measure the length of the equator is to multiply the number of kilometers in one degree by 360.

When the length of the meridian arc is known, it is not difficult to calculate what the length of one degree will be. This method is the basis of geodesy.

How to calculate the radius and diameter of a planet

The radius and diameter of the Earth are easy to calculate. The formulas d=l/π; r=½*π are used for this purpose. The letters mean:

The length of this magnitude was already known in ancient Greece. The necessary calculations were made by the ancient Greek mathematician, astronomer, geographer Eratosthenes. He knew that on the day of the solstice on June 21 in Siena, located half a thousand miles from Alexandria, at noon the bottom of the wells was illuminated, and no shadow was detected from objects. It appears that the sun was at its zenith in this part of the world. Nothing like this was happening in Alexandria.

At noon on the summer solstice, the scientist measured the shadow of the city obelisk (he knew its height). Thus it was determined that Alexandria and Siena were separated by 7 degrees of latitude.

The astronomer did the calculations next. 7° is about one-fiftieth of a 360° circle. Multiplying the distance from Siena to Alexandria by 50 gave the mathematician a number of 25,000. That’s how many miles the circumference of the earth was.

Eratosthenes’ measurement of the Earth’s circumference

The length of the Earth’s circumference, calculated by Eratosthenes, is slightly less than the actual one. This is not due to the primitiveness of the calculations: this way of knowing the circumference of the Earth is quite accurate. During Eratosthenes’ lifetime, no one knew the exact distance between these localities. Also, the scientist did not take into account the fact that the two cities are located on two different meridians.

In the Middle Ages, references to such studies were forbidden by the church. Only in the 16th century circumnavigation of the globe by F. Magellan made it possible to verify that the planet really has a circular shape, and that its circumference is really equal to 40 thousand km.

Knowing how many kilometers the circumference of the Earth is at the equator, we can calculate how long it would take to walk around it. If we assume a typical walking speed of 6 kilometers per hour, using the formula t=S/V, we can get a value of about 6,700 hours, or 278 days.

That’s how long it would take to walk around the Earth without interruption. If we assume that an imaginary walker walks for 6 hours each day, then it would take him about 1,110 days, or more than 3 years, to complete such a journey.

How long does it take to walk around the Earth? And is it realistic?

Any physically fit and fit person who is not afraid of difficulties and is willing to spend a few years of his life traveling may well try to circumnavigate our Earth along the equator. The length of the assumed distance, or the equatorial circle, is 40 thousand kilometers. If walking at an average speed of 5 km/h, it would theoretically take 1000 days (or 2 years and 9 months).

The Englishman Robert Garside became the first man to run around the world by jogging. For five years and eight months he was on the road, conquering a distance of 48,000 kilometers. He crossed the water sections of the route by ships or planes. The Briton crossed five continents and 30 countries before reaching his starting point in the city of New Delhi in India. He waded through impassable forests, conquered mountains and deserts that met on his way. In the process, the traveler wore out 50 pairs of sneakers!

He had many adventures, by the way, including attacks by hooligans, imprisonment, and the difficulties of acclimatization. During his journey, he slept in places ranging from the rooms of five-star hotels to the cells of police stations, and he also collected from 120,000 pounds of donations from people. Incidentally, Robert was imprisoned in China because of incorrect entry documents. Along the way, Robert also met a love, a girl from Venezuela named Endrina Perez, whom he married in 2004.

A pocket computer with a camera served as a companion to the brave Briton on his solitary journey, except for enemies and casual onlookers, on which Garside documented his steps around the planet. And it is very important, because the commission of the Guinness Book of Records at first did not believe the audacious runner, until they studied his video archive. His epic deed was only recognized three years later, when the Briton had already begun to regret the years-long trip.

Interesting information about the Earth’s equator

The equator has a year-round hot and humid climate. The forests of the Amazon and equatorial Africa, Indonesia have a variety of flora and fauna. Temperatures fluctuate between 25 and 30 degrees during the day. At night, it is not much colder: so much the surface of the earth is heated by the sun’s rays.

However, the equator is interesting because of some geographical features:

The size of the Earth is one of the main parameters in astronomy and is of great practical importance. You can use it to find out the diameter and radius of the Earth. You can calculate these parameters by applying simple mathematical calculations.

No comments to show.